Hey ya’ll- I’m back from Brazos Bend 100! That’s right, I have lived and survived another ULTRA race. My experience was definitely one with a lot of ups and downs but absolutely incredible and I’m super eager to share it with you! Let’s backtrack a bit to the night before.

I arrived to Brazos Bend State Park in the evening and got all settled in the shelter. They are like mini cabins, with electricity, a fan and we had showers and restrooms nearby. It was SO nice to have a lodging area right at the site of where the race was. This made for a stress free morning and I was fired up and ready to go for the 6 AM start. This was my 2nd 100 miler so for the most part I knew what to expect, I had my nutrition plan/hydration dialed in and ready to go. 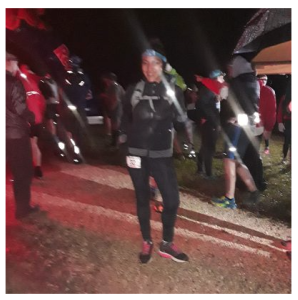 The 100 mile course itself is a 16.74 mile loop a total of 6 times. It winds around through the state park and into the woods a bit, which is a totally dirt trail with lots of mud. Since it rained pretty steady down in the Houston area, the ground was super saturated. Which proved to make for an interesting terrain! There was a LOT of mud on the course that was super deep, and almost sucked your shoes right off of you. So, that was quite interesting.

The beginning of this race, I started out pretty conservative and felt rather good. Energy wise, I was feeling great and so very happy- a few of my friends from the Dallas Dirt Runners were even there to join the party. I also know a few people from the Trail Racing Over Texas clan (which is mostly based out of the Houston area) so it was nice to see SO many familiar faces. And unlike at Rocky Raccoon (my 1st 100 miler last year) the loops were short, and with nearly 900 RUNNERS (!) you never felt alone on the trail or anywhere along the course.

The entire day mostly was just trucking along in the mud and me constantly assessing how my body felt running through the muddy terrain. Going into this race I did know that I wanted to run a fairly faster race than last year, but with the course being so messed up due to weather, I was starting to feel like this was not within reach. We also saw a TON of folks drop out in all distances (ranging from the half marathon to 100 miles) really due to not being able to run the course because it was so muddy. But I knew I did not come here to sell myself short and quit early. Because if there’s anything about me that stands strong it is the fact that I am stubborn as all hell and I WILL NOT let my brain tell me that I cannot do something. Where there’s a will, there’s a hell of a way.

So I kept on trucking until my pacer, Kevin joined me for my 4th loop. For those of you that have been faithfully following along this was my pacer that ran with me at Rocky last year. I knew the minute I signed up for this race that I wanted Kevin to run with me through the night. Sometimes in life you just meet those people, who just kind of GET you. And get your crazy. I feel like Kevin is one of those people. So…we went through the night, and talked and talked and laughed and hallucinated together in the dark and he literally kept me awake when I wanted to sleep run/power hike. I did reach a few low points during this race, and Kevin was right there to talk some sense into me. I knew with Kevin there, there was no way I was going to quit. Sometimes you just need those people, to remind you of your incredible strength and power.

As far as the aid stations on the course, again this time I just took advantage of everything on the course. I was so thankful this time my body never felt weak and my tummy didn’t give up on me. I think I ate and drank at appropriate times and the incredible volunteers made sure we were so well taken care of! Rob Goyen, the race director definitely makes sure all aid stations are well stocked and it is honestly one of the best run trail racing situations I’ve seen in my years of doing this. I honestly want to run more of his races now that I know how organized everything is. It definitely makes for an incredible race experience despite the conditions.

So, we reached loop 6 (MY LAST LOOP! Hallelujah) and I was able to grab a 2nd pacer since Kevin had run with me throughout the night. My friend, Robin who is a very seasoned ultra runner, got me through the morning hours. At this point, my legs were absolutely trashed. There’s just no way of getting around that fact, at mile 80 something, when you want to throw in the towel the most. I mean I think I power hiked a majority of that loop because I just felt like I could not go anymore. But she made sure I kept going, and distracted me with talk of her current races and just life in general. It was fun having that “girl talk” coffee chat in the morning- to get me through it as the sun was starting to rise.

The last stretch I started to become worried that I may not beat my time from last year, simply because the mud was so relentless that entire course. My calves were starting to give out completely on me, and a few times I needed to stop and stretch and reassess. Robin told me she had done a 100 mile mountain race recently that she had to back out of and DNF (did not finish). She quit because the weather conditions were tough and things just weren’t going well. She said “I had to DNF and it is still something that’s staying with me and I can’t shake to this day. If you feel like you can keep going, do it.” The words she said, stuck with me. I didn’t care what the outcome was going to be at that point or if I PR’d. I wanted that buckle more than anything in the world.

The buckle represents so much literal blood, emotions, and strength that the day holds. I wanted to go home with a sense of proud accomplishment, something that no one could take away from me. It is something honestly that you can’t explain in an Instagram caption or Facebook post. Or to a coworker who asks you what you did over the weekend. It stays with you, and in the weak moments in life, it’s there to remind you of that day you overcame weakness, tears and just continued to press forward when hope was lost.

And when it was all said and done, I finished the mission with a finish time that I was super proud of. I set a PR, a personal record and slashed off 20+ minutes off of my last 100 mile finish.

I absolutely loved this course and will definitely return. It was funny because I think around 1 AM or so I told Kevin, “I don’t think I’m cut out for 100 milers. This is just not my thing”. But now, I’m thinking of returning to the distance, in some capacity. Isn’t that how it always happens? Except, us 100 mile runners, we have a few screws loose. That is for sure.

“I’m convinced that a lot of people run ultramarathons for the same reason they take mood-altering drugs. I don’t mean to minimize the gifts of friendship, achievement, and closeness to nature that I’ve received in my running career. But the longer and farther I ran, the more I realized that what I was often chasing was a state of mind – a place where worries that seemed monumental melted away, where the beauty and timelessness of the universe, of the present moment, came into sharp focus.”
― Scott Jurek, Eat and Run: My Unlikely Journey to Ultramarathon Greatness

How was your weekend? Any more ultrarunnner unicorns out there? Share your battle stories with me!