Hi there and HAPPY 2019! Hope you had an incredible weekend and celebrated the new year doing some fun things. Today I figured we would do a RECAP from my fun long weekend of running!! Something I like to do every year is a big run across my town with some of my ultrarunning friends! That’s right, it’s not a race- no medals or special recognition or anything. But just a fun way to end the new year with some major miles and with a BANG! So today I will tell you how it all went down. Hopefully if you’re local you can join us on the next one! 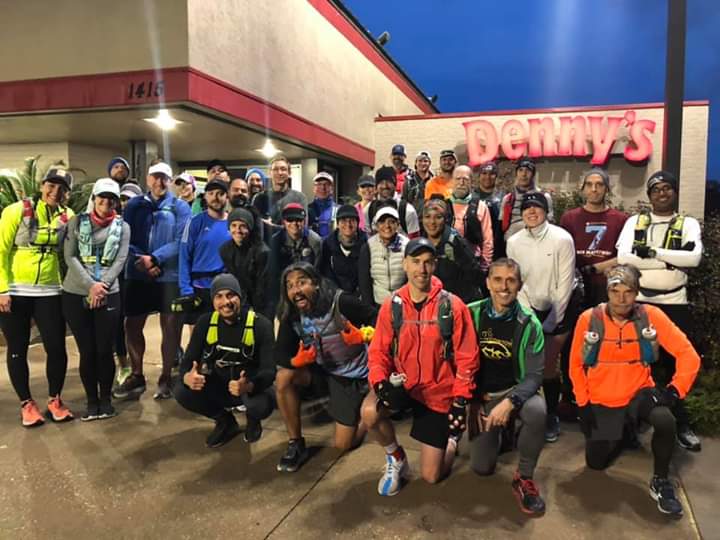 So this is the third year in a row that I’ve done the Dallas to ‘Cowtown’ run. For those of you unaware, Cowtown is slang talk for Ft. Worth – which is the other big bustling city near Dallas. 30+ miles outside of Dallas to be exact. Ft. Worth is very “cowboy” esque– they have rodeos, they have people that like to ride horses on the side of the road, they have all of the things a TRUE Texas city should have. It is a little different from your ritzy Dallas and it definitely has its own charm. So, one of the coordinators for this race (who is an ultra runner like myself) will post this run on Facebook every year and anyone who is everyone can join in. 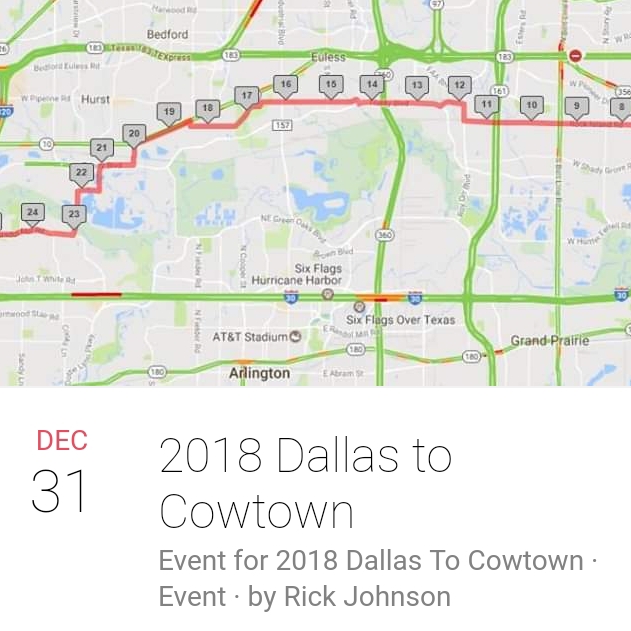 Typically, the distance is 33 miles long, and we run near/along the local train rail system. So, you can opt to do the entire distance- or shorten it a bit and hop right back on the rail and head to your car. We all parked at Denny’s in Dallas this year and made the trek WEST towards Cowtown.

Since I just finished Brazos Bend 100 a few short weeks ago, I knew for a fact that this would be a FUN RUN. No worries about pace, and I knew since it wasn’t a race I could stop whenever I wanted. But I did want to do the entire distance and wanted to see how my legs would hold up. This year we had a lot of takers that wanted to do the whole shebang. I love it when the FUN runners show up for stuff like this because it really makes the experience memorable.

I arrived in just enough time for the briefing, then we took pic and we were off. I stayed pretty conservative pace wise with something I could hold onto forever without crashing, which was in the high 9s/low 10s range. The sunrise over Dallas was lovely with some nice cloud cover. 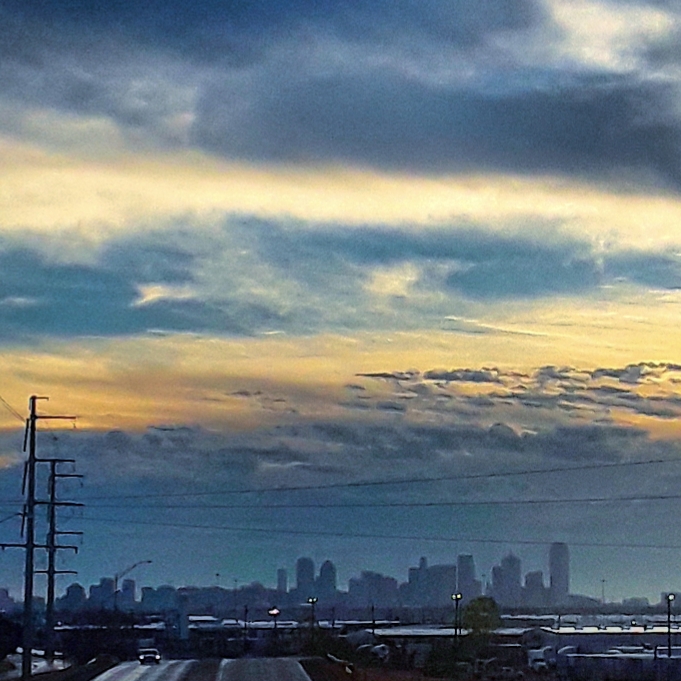 We made a couple of pit stops early on, for water/gatorade and there were lots of gas stations on the route which was perfect. Temps stayed pretty chilly in the morning and then the sun came out to play a few hours in. At around mile 20 or so, my legs started talking to me so I grabbed some pickles from 7-eleven which turned out to be a God send. The salt really got rid of the calves cramping which was great. 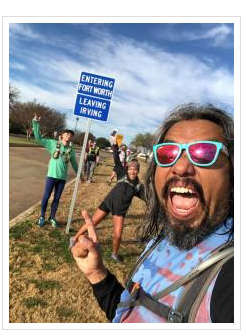 Along the route, we pass through a few cities doing an uphill climb, then it’s a little bit of downhill and another big uphill into Ft. Worth and downtown Ft. Worth. I also love running along the Trinity Trails, which were included in our route. We found a great mural in this area and of course I had to grab a pic. 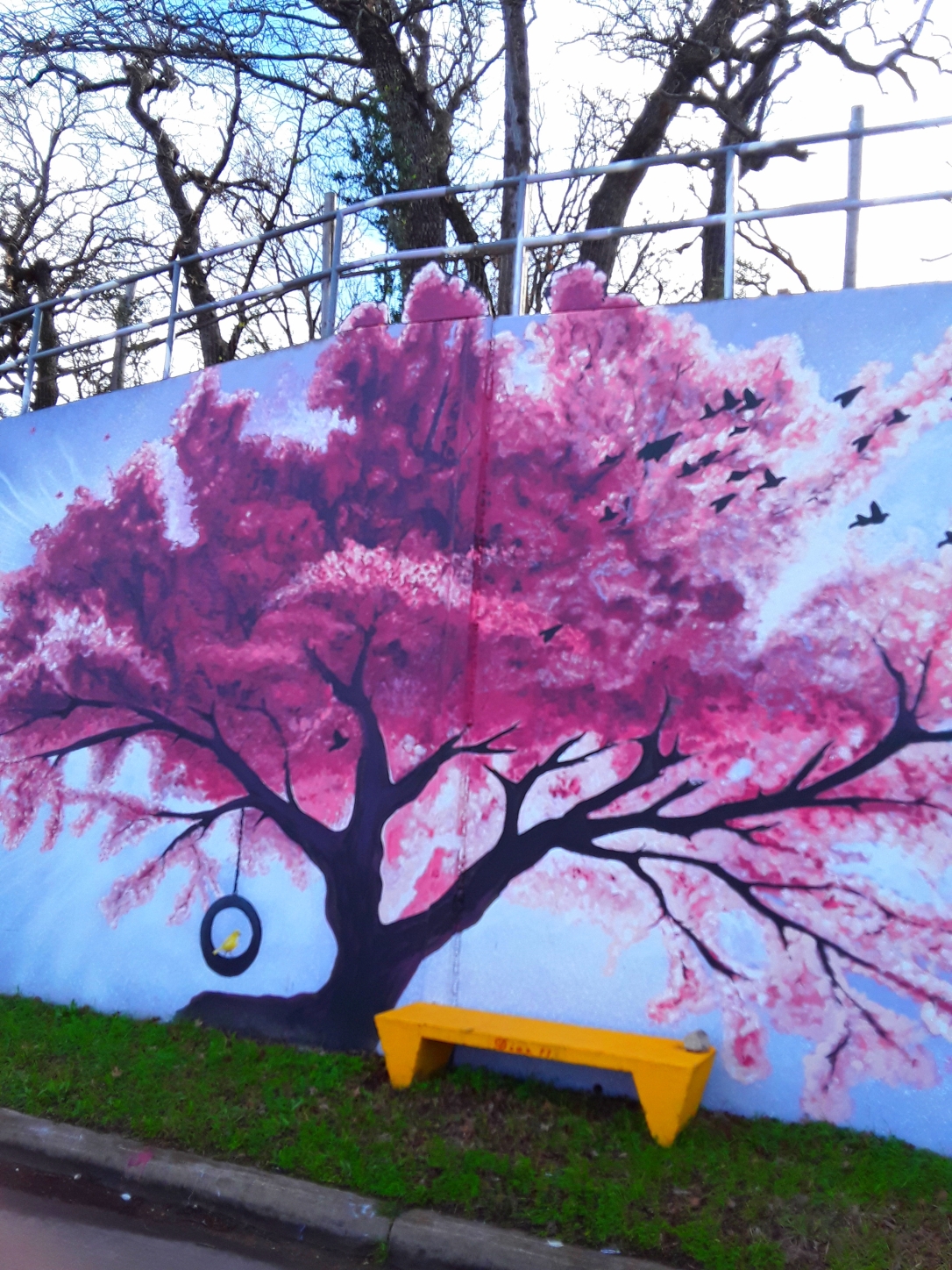 Once we arrived to our destination there was a pub that said they would allow us to crash and have a little post run party. I finished with the distance and added a bit to get 33.3 miles because why not? The point 3 was for the 3rd year that I’ve done this run. Good times indeed and met a lot of super fun people who like running and chatting and listening to jams along the run just as much as I do. 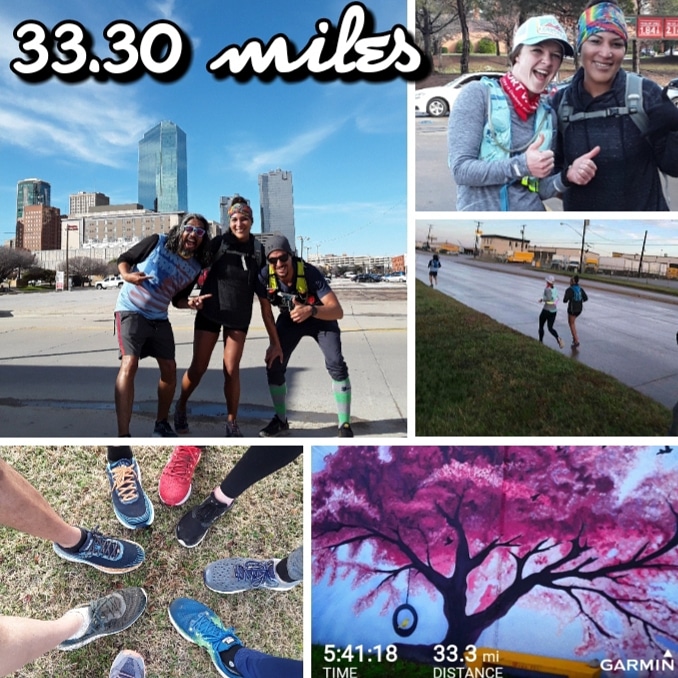 I think next time we run in that direction I may park my car out in Ft. Worth so I have my vehicle to drive home. Hopping on the train was nice for my legs though because I got to stretch out and play on Facebook. But yes, fun!! Join us next time if you dare. Run a little bit of it or run the whole thing. Great way to end 2018 with a bang. And, I got to see two great city skylines. Hey, Ft. Worth! 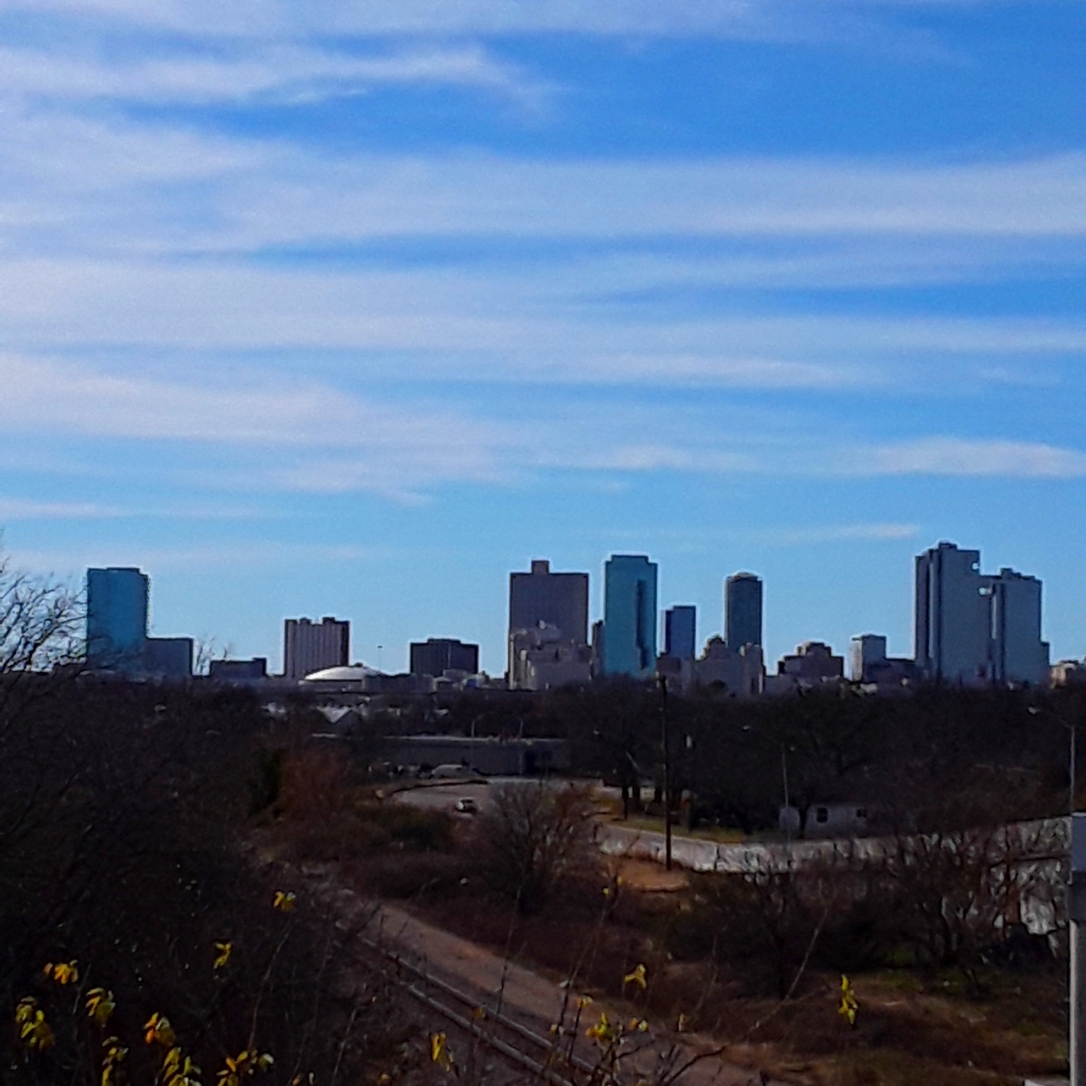 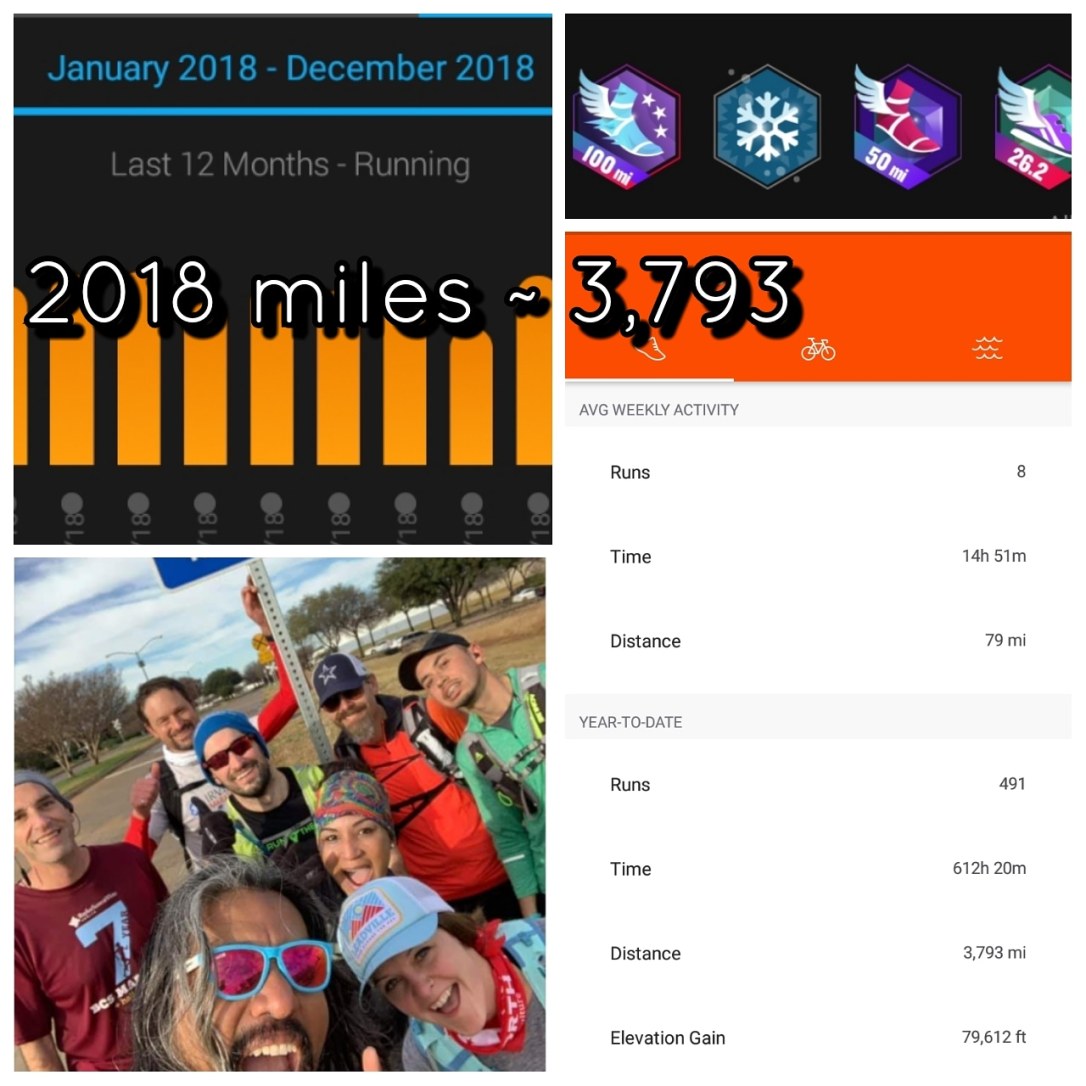 Happy New Year and cheers to getting out there and busting out some more miles and making more memories!

How was your New Year’s Eve? Did you do anything special?
Ran 33.3 miles and then danced the night away. After a massive nap, of course.

Leave a Reply to The Random Mind Cancel reply